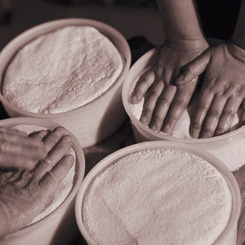 The mountain pasture of Pruno dates back to 1500 as well as the pastures of Campaiana and Salera. The statute of Corfino dating back 1738 described it as an halfway seasonal pasture (1000m above sea level) that is between the town of Corfino (836m above sea level) and the pasture of Campaiana (1358m above sea level). The purpose of these halfway mountain settlements was to be used as a summer grazing land at high altitude from May to October. The trails to follow with the flocks were rigorously determined in the statutes, as well as the time and the terms for moving them "flocks of sheep or cows of any breed... must be moved to the Alpe every year from June to September". The grazing on the pastures depended on the cutting of hay so that the whole production of grass could be exploited at the different altitudes without using the stock of hay which was necessary in winter. 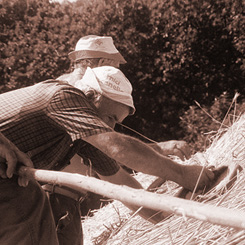 The flocks of sheep moved from Corfino on the following dates: from the 20th of May on the feast of San Paolino, the 12 of July, the flocks stopped at the pasture of Pruno and were then taken to Campaiana through the paths on the fields of Isera and Magnano or through the mule tracks of Grottacce and the maestaina of San Pellegrino and from here on the on the high grasslands of the Apennine Of Bocca di Scala and of Mount Vecchio. The day of the coming back of the flock to the village of Corfino was on Saint Michael, 29th of September, a date which represented the starting of the season of chestnut in the village. Today the antique trails of the transhumance do not echo with the bleat of the flocks, but they are still valid if you want to discover this territory, its history and traditions: the walking and fascinating people who like hiking and those who love nature in general.